What Ukraine must do to make it this time

The Centre for Economic Strategy (CES) jointly with A-Club of Alfa-Bank and Dragon Capital hosted a panel discussion on “What Ukraine must do to make it this time” on June 25 during Alfa Jazz Fest. Slava Vakarchuk, co-founder of CES, inspired and moderated the event. According to him, such a panel discussion aims to become an annual event and “is focused on searching for answers to the most striking, painful, interesting and important questions that Ukraine faces in politics, economics, culture, and other issues. Our task is to verbalise new and unhacked, but interesting ideas about helping our country to succeed”.

The speakers of the panel discussion were Prof. Erik Berglof, Director of the Institute of Global Affairs, The London School of Economics and Political Science; Francis Malige, Managing Director, Eastern Europe and the Caucasus, EBRD; Ivan Mikloš, chief advisor to the Minister of Finance of Ukraine, former Vice Prime Minister and Minister of Finance of the Slovak Republic, CES co-founder; Prof. Timothy Snyder, Professor at Yale University specialising in the history of Central and Eastern Europe; and Vitaliy Shabunin, Chairman of the Board of the Anti-Corruption Action Center, member of the civic platform “Reanimation Package of Reforms”.

What must Ukraine do to make it this time?

In order for the Europeans to want you, in order for Europe to survive, you have to solve your own problems first. It’s all one process. Europe has a much better chance of surviving if you solve your problems. So you can’t wait for Europe. You can’t let some Europeans to tell you what to do, the point is not to wait for the Europeans, not to just listen to them, but to understand: if you solve your problems, then Europe has to come to you. The real problem in this country, the problem that has to be solved– what Ukraine must do to make it this time–the real problem is the rule of law. That’s a real problem. That’s the thing you have to solve.

Why has Ukraine lagged behind its Central European neighbours in development?

Erik Berglof: It’s ultimately up to the fact that you had a much stronger legacy of the Soviet Union than in the countries that have succeeded. And that’s, of course, closely tied to the fact that you were not offered in the same way as they were the root to European Union membership. But it all traces back to the legacy of the Soviet Union. So is there no responsibility on Ukraine itself? Of course, there is. And I think what makes it particularly challenging now is that you did try, and it didn’t work out exactly as you wanted in the past.

Part of the Soviet legacy was the fact that you didn’t have the institutions in place to run a country, to run your own economy. There are so many aspects to this legacy, it’s about that, it’s about incredibly centralised control that you’ve inherited, which, you know, made local participation very difficult. There was no real power locally, real capacity to run public services, which, I think, is the way forward in Ukraine to get citizens involved in all parts of the country and feel that they have some influence over health care, over education and so on. All those things you inherited from the past and you have to deal with them. 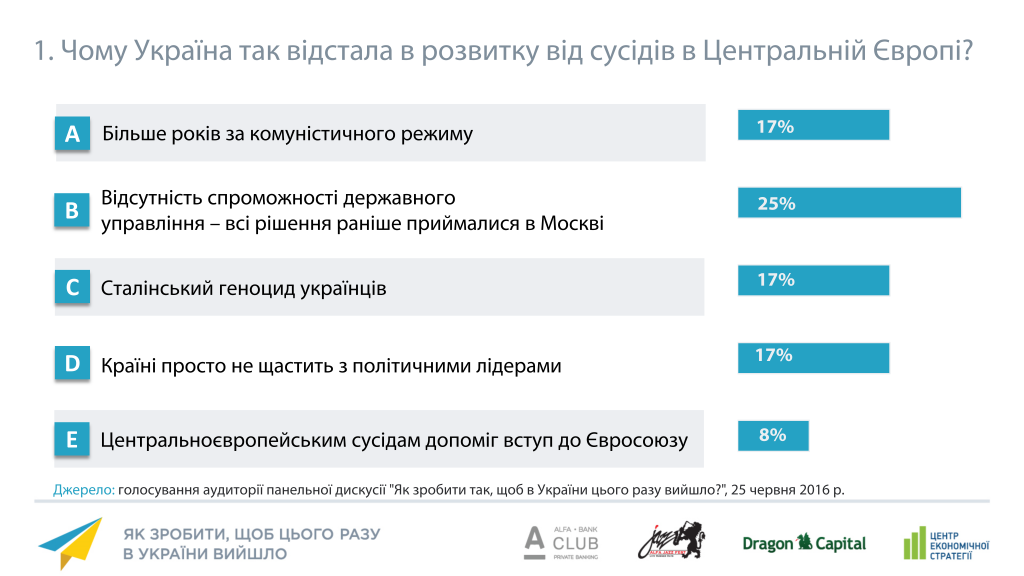 What must Ukraine do to use this chance to unleash its potential?

Ivan Mikloš: For the first time it was really a change which we can define as a systemic change. And the biggest achievement, in my opinion, the biggest precondition of this is that there is a really strong will, will among ordinary people, for integration and for reforms. But now what for the future? As I said, the biggest threat, the biggest question mark, is about speed, but even mostly I’m worried about the sustainability of the reform process. What are the biggest threats for the future, for sustainability of a successful reform process? I think, there are three biggest threats for this: the first one is corruption; the second one is Putin’s Russia; and the third one is populism.

And in my opinion, the practical opinion, how we did reforms, the most effective methods for fighting against corruption, for instance, for speeding up reforms, for opening the country, opening competition, have been liberalisation, deregulation and privatisation. These were also the most effective methods for fighting against corruption. And it is clear that if Ukraine will continue in this direction, then reforms will also bring positive results and Ukraine will be a successful country, because I have to say that I don’t know any other country which is still so far below the potential of the country. Ukraine has huge potential and to use this potential will be necessary to continue the reform process. 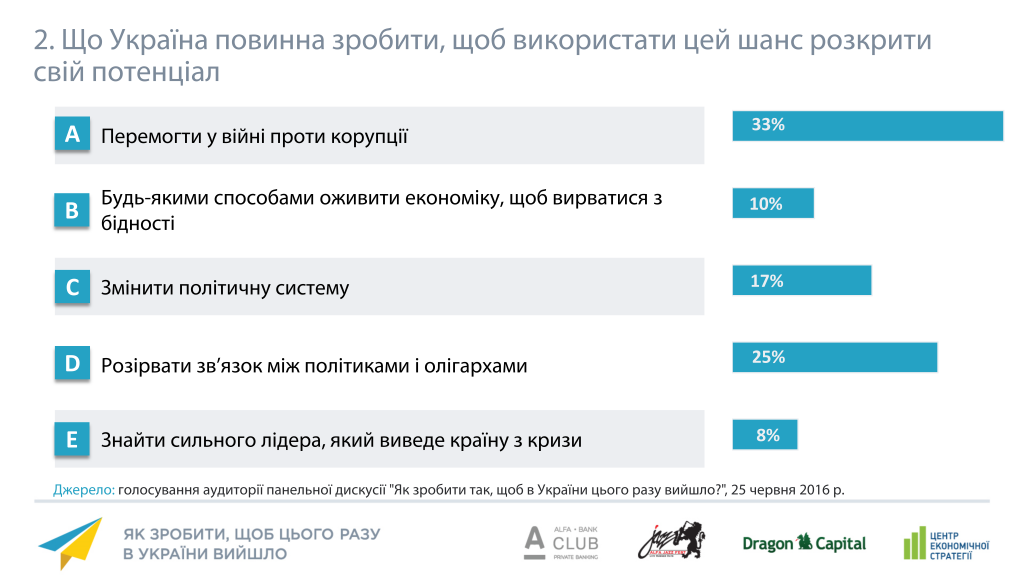 Let me tell you two quotes. The first one is from Jean Claude Junker. When I was Finance Minister we discussed the Lisbon strategy, how to increase the competitiveness of Europe, and he said: “We all, of course, know what is necessary to do. What we don’t know is how to win elections after doing this”. But I don’t think that Junker was right in this, so I will offer you also another quotation. I think, it’s Benjamin Disraeli. And he said: “What is the difference between statesman and a politician? While politician cares about next elections, statesman cares about next generations”. And this is about the lack of leaders, which means the lack of statesmen. People, who are doing necessary changes despite the political risk connected to this. If I am speaking about leadership, ownership and communication, I’m speaking about this. And this is not true, while I think Jean Claude Juncker was not correct, of course, it is a big risk connected with this. But we have a lot of practical examples when leaders, who would do these kinds of reforms, succeeded also politically. What is the most important in this is that reforms have to be done as quickly as possible and as more completely as possible. Because then you can expect that if you have a four-year term, not only the costs of the reforms will come, but also the positive results of the restructured economy, economic growth.

What are the strengths that we can build on?

Francis Malige: I think, the biggest strength of Ukraine, when it comes to reforming its country and reforming its economy and finally breaking decisively with the Soviet past, is the courage of its people. That’s the core strength of the country and that is what you’ll build the country on, I think. I am impressed every day. I’m impressed by the fact that people were on a Maidan. In the college in Brussels I’ve probably never seen a demonstration of people saying: “We want to be Europeans” to the point of facing bullets. I think, it’s the only country in which that has ever taken place. And I think that this courage, that has been demonstrated by the Ukrainian people at that time, needs to live on, lives on and this is what the country will be built on.

I take heart in the fact that only 8% of the people have said: “We need a strong leader”. And it’s really good, because historically, you have one strong leader for a century and he is in power for 10 years. Which means that 90% of the time you don’t have one. So we need to learn to live in the 90% of the time when we don’t have a strong leader and we’re saving country, right? Because that’s our working environment. But democracy is not just about elections. It’s about, again, the courage of the people. Not just to have independence, but also to exercise it. 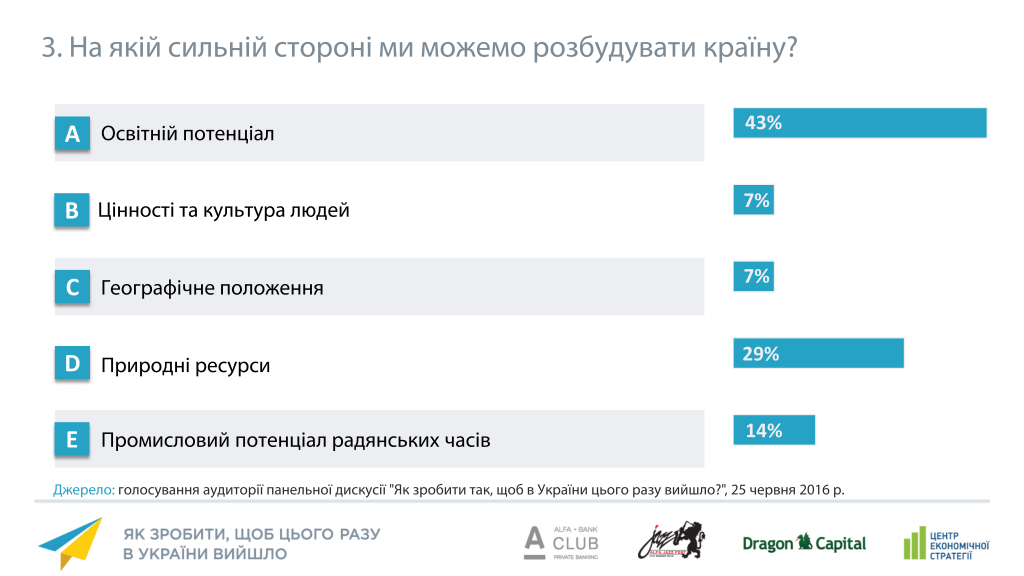 Why did deaths on Maidan not change the corrupt elite?

Vitaliy Shabunin: This issue is complex and very painful indeed. Our organisation is developing and acting according the theory that the current political elite – the people who make key political decisions – are corrupted. They do not aim to implement system changes in the country, but to keep the current order. This is the bad news because the political elite is the key driver and tool for change throughout history. However, this is good news because we changed a lot by ourselves during the last two years, despite the lack of such a driver in Ukraine and despite the absence of a consolidated political elite. We could not even dream about what happened during the last two years, at least in my sphere. Martynenko is not in the Parliament, and there are investigations into him in five jurisdictions; Onyshchenko seemed to escape soon after the voting in Parliament; state registers are opened, and so on– all that happened against the will of political elites, without their support. This is a benchmark for us, and the current political elite would not be able to act below that benchmark. This is the logic of our activities – the highest pressure on these elites in order to make them do at least something to change the general rules of the game, and to allow a new political elite with other values to rise. 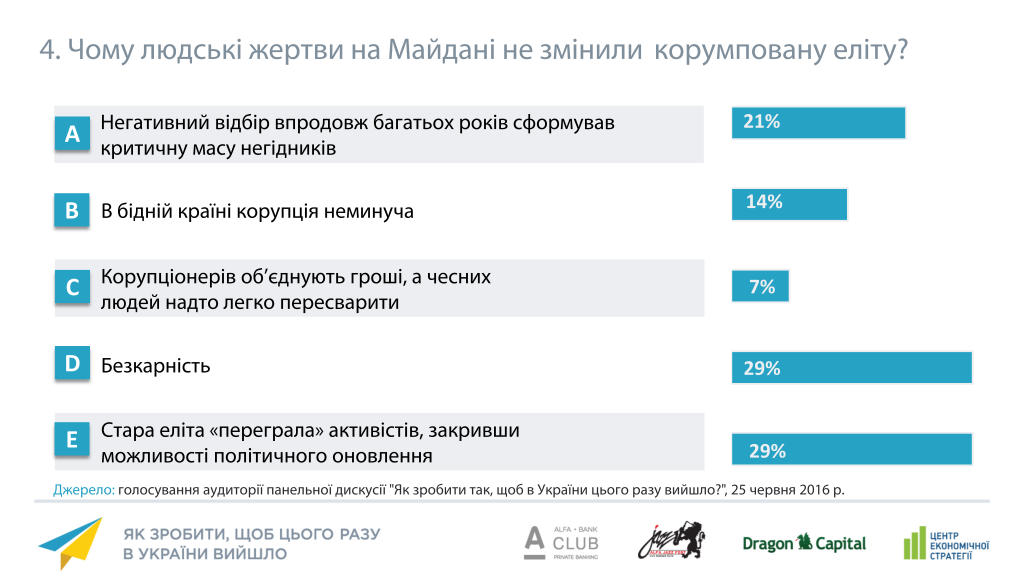 Other events on this topic